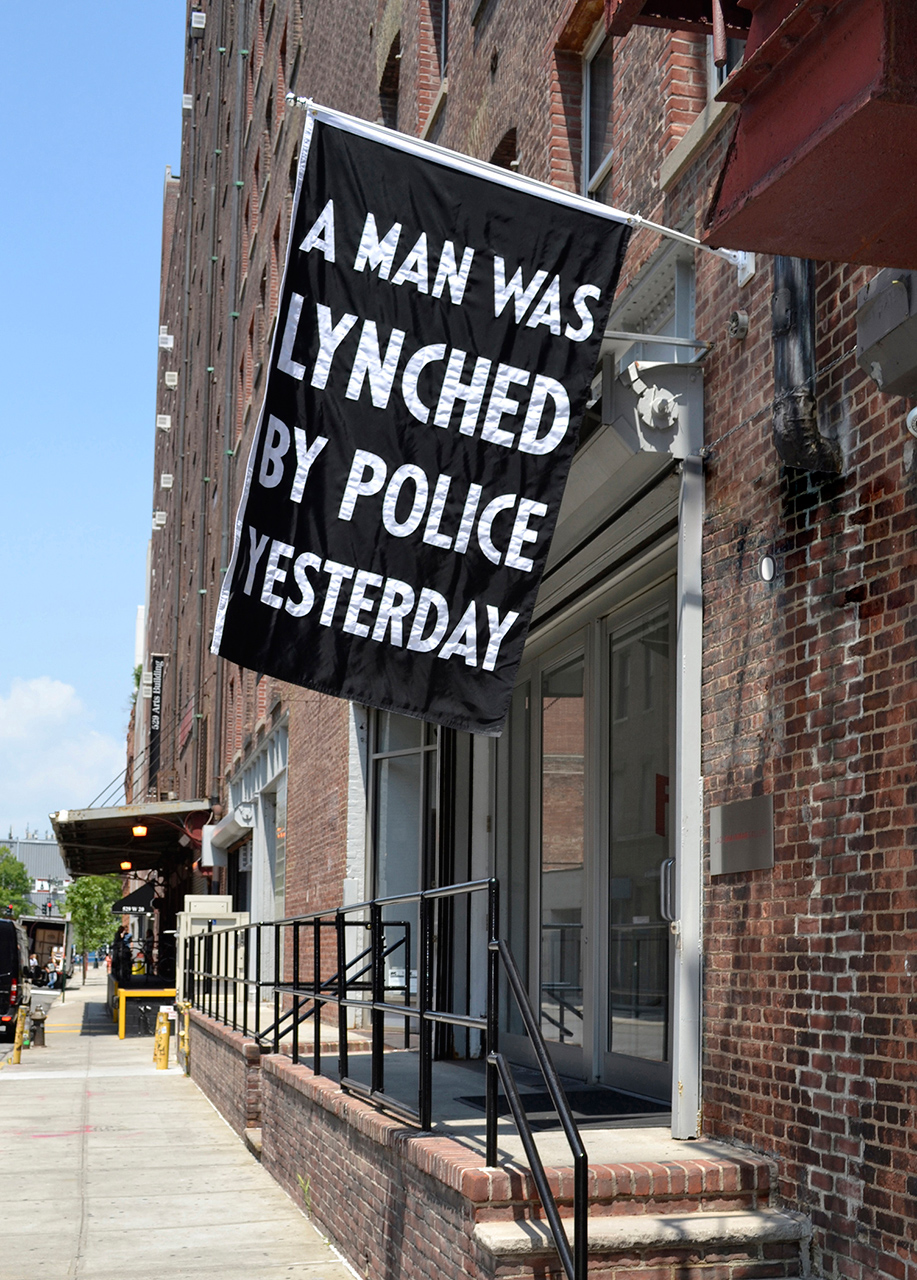 A Man Was Lynched by Police Yesterday

In 2015, Walter Scott fled for his life, stalked by a policeman who then cold bloodedly shot him in the back. We all saw the video and in response to this murder I made the artwork, “A Man Was Lynched by Police Yesterday.” This simple banner, printed with the eponymous words, is an update of an iconic flag that the NAACP flew from their national headquarters window in New York in the nineteen-twenties and thirties the day after someone was lynched. It read simply: “A Man Was Lynched Yesterday” and was part of a their anti-lynching campaign — a national effort to end that scourge.

During the Jim Crow era, Black people were terrorized by lynching — often public and publicized extra legal torture and murder of Black people. It was a threat that hung over all Black people who knew that for any reason or no reason whatsoever we could be killed and the killers would never be brought to justice. Now the police are playing the same role of terror that lynch mobs did at the turn of the century. It is a threat that hangs over all Black people, that we can be killed by the police for no reason whatsoever; for a traffic stop, for selling CDs, for selling cigarettes. Shot to death, choked to death, tasered to death. Standing still, fleeing. Shot in the chest, shot in the back. Hands up, hands down. Point blank range or at a distance. And the police never face justice for their crimes. Like lynchers in the Jim Crow era, there can be eye witnesses, and now even video evidence, and yet the police get away with murder.

My art often looks at how the past sets the stage for the present but also exists in the present in new form. This artwork is an unfortunately necessary update to address a horror from the past that is haunting us in the present.

Responding to the recent police killings of Philando Castile and Alton Sterling, this updated flag was a last minute addition to For Freedoms at Jack Shainman Gallery in New York (July 2016). It was an unusual, bold, courageous and fitting decision for the gallery to decide to include “A Man Was Lynched…” The art was displayed on the outside of the gallery in a highly visible manner in a way that was evocative of the NAACP presentation. Immediately people responded and initiated a much needed wider conversation, leading to coverage in the New York Times, PBS Newshour Magazine, Fox News, Hyperallergic, Artnet.com and on social media.

There is an epidemic of police killing people. 1,134 stolen lives in 2015 alone. Around the country, people are deeply concerned and taking action—from determined protest shutting down streets to respected athletes, musicians and artists are making powerful statements and art. This is inspiring and needs to grow. I’m glad for A Man Was Lynched by Police Yesterday to be part of the growing dissent and ferment as people act to end police terror.