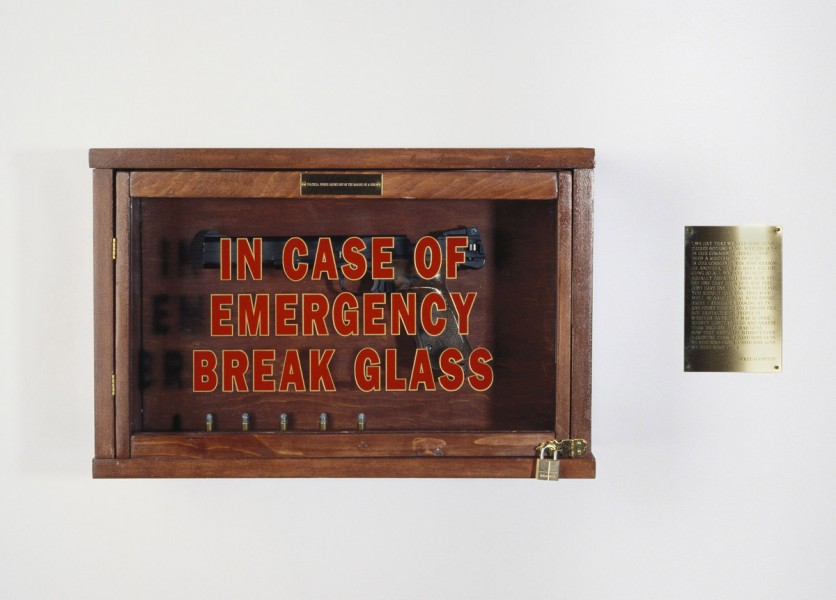 Bensonhurst: Violence is an Equal Opportunity Employer has two brass signs as part of the sculpture.  One on the front of the case on and one next to it.

The text on brass sign on the case is a quote from Mao Tse-Tung and was popularized by the Black Panthers reads:

Political power grows out of the barrel of a gun.

The text on the sign next to the case is a quote from Fred Hampton, the leader of the Illinois Chapter of the Black Panther Party who was murdered by the government in 1969.  It says:

…There’s nothing wrong with the guns in our community, there’s just been a misdirection of guns in our community.  For some reason or another, the pigs have all the guns, so all we have to do is equally distribute them.  So if you see one that has a gun and you don’t have one, then when you leave, you should have one.  That way, we’ll be able to deal with things right.  I remember looking at TV and found that not only did the pigs not brutalize the people in western days, they had to hire bounty hunters to go arrest them because they had guns.  Now they brutalize without even arresting them.  They shoot somebody with no intention of ever arresting them.  We need some guns.  We need some guns.  We need some force. —Fred Hampton