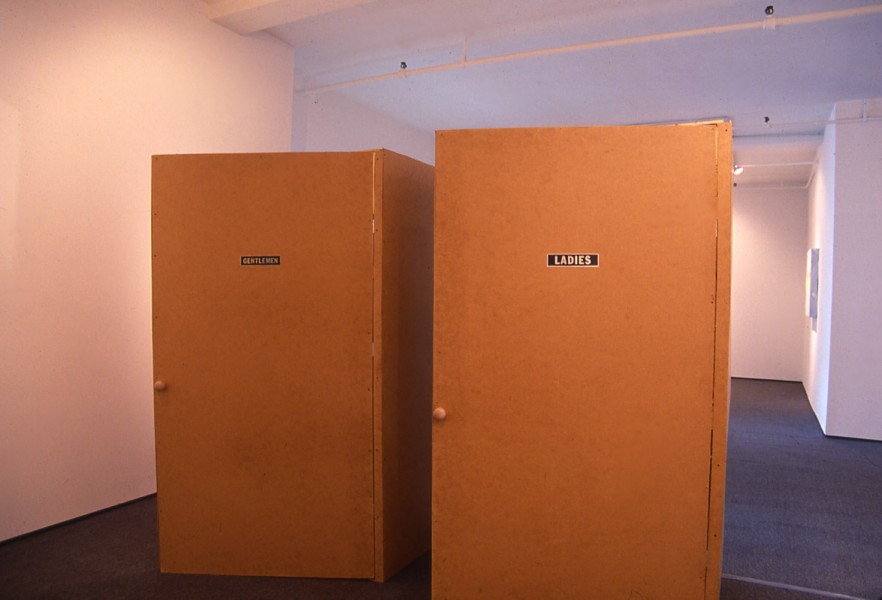 On the Correct Handeling of Contradictions

Blacks Only/Whites Only and Women’s Room/Men’s Room are installations for audience participation.  Each installation consists of a pair of 3’x4’x7′ booths.  On one of the doors to Blacks Only/Whites Only is a sign with the text “BLACKS ONLY.”   On the other door in this installation is a sign with the text “WHITES ONLY.”  Women’s Room/Men’s Room is similarly constructed with one booth carrying the inscription, “LADIES”, the other bearing the sign “GENTLEMEN.”

The viewer may enter any of the booths.  Inside each booth is a set of headphones where the viewer could hear people speaking or music playing.  The speakers are voices from the oppressed and others speaking about their lives, the bitterness, the resistance, and the hope for the future.  There are also poems and Rap songs.  Some of the comments are in Spanish and in other languages.  The result is a montage of voices and sounds addressing each of these vexing contradictions/divisions (ie Blacks/Whites, Women/Men) which the system imposes on people and which all but define this society.  There is also a microphone and tape recorder for viewers to record their own responses, thoughts, and feelings.

There are only two audio tracks for the four booths, one for Blacks Only/Whites Only and one for Women’s Room/Men’s Room.  In the booths the audio plays in a continuous loop, thus the voices that the viewer/participant hears depends upon when they enter the booth and how long they decide to stay. Each audio track is about 20 minutes in length. Below are brief samples of what the viewer may hear in the booths.