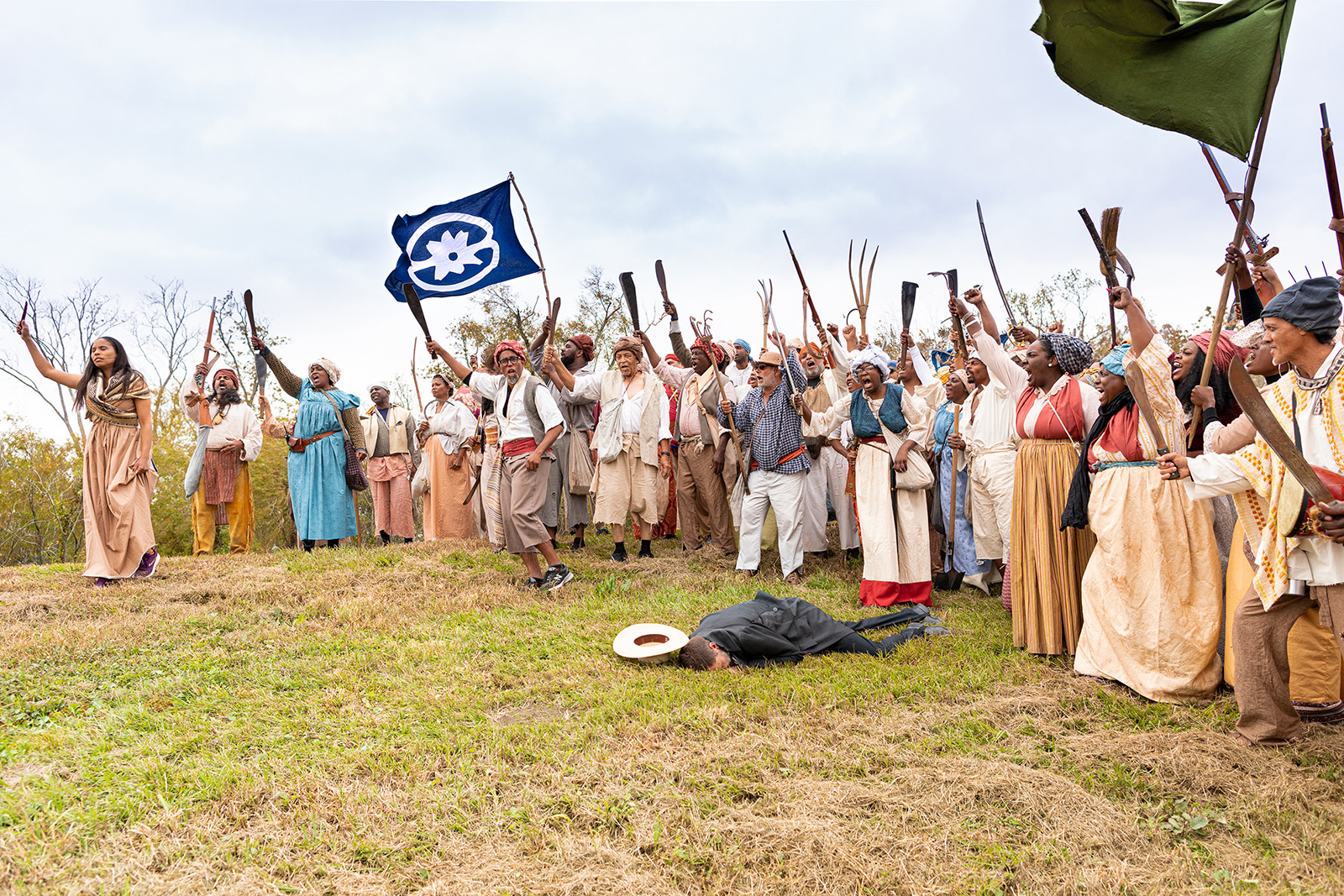 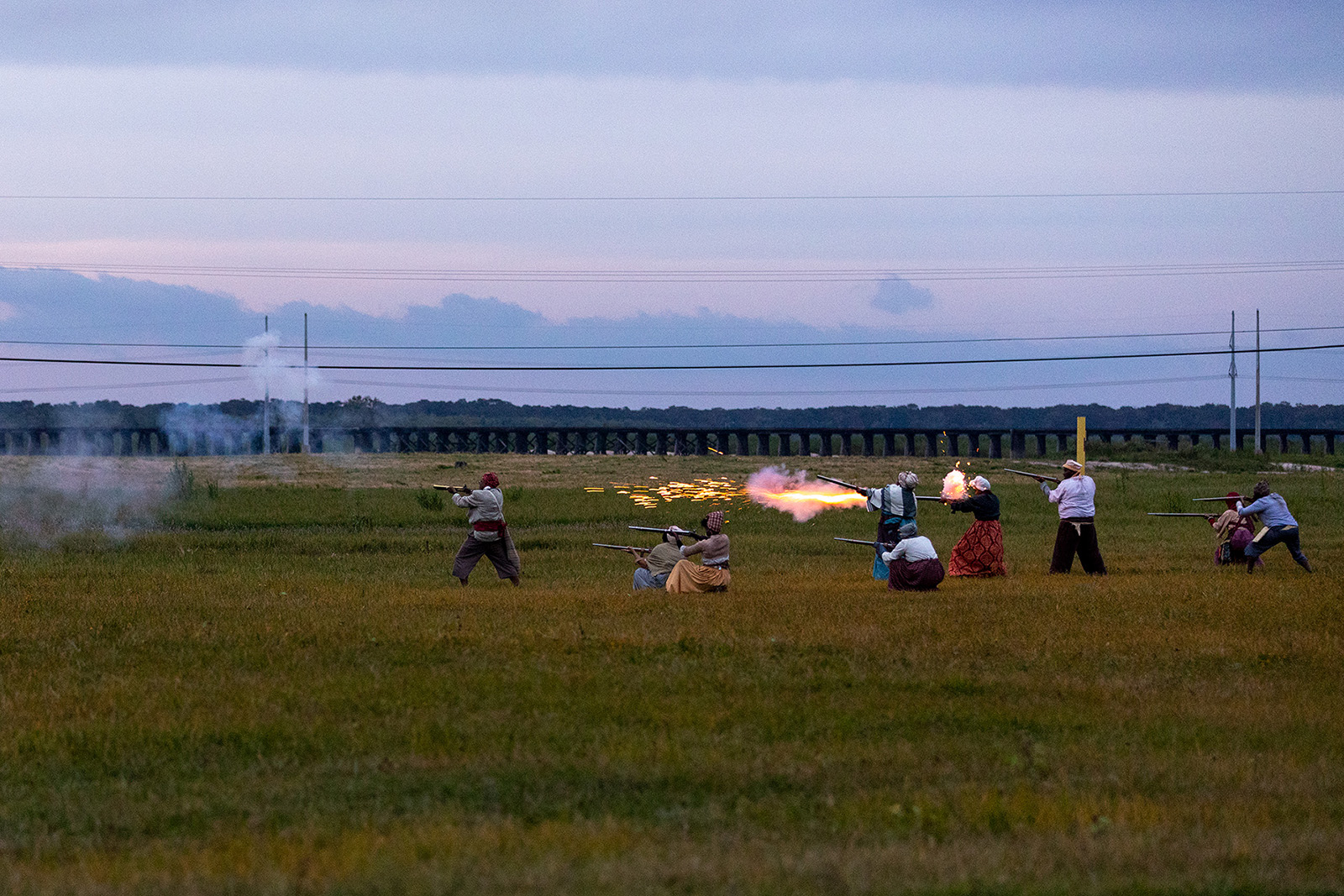 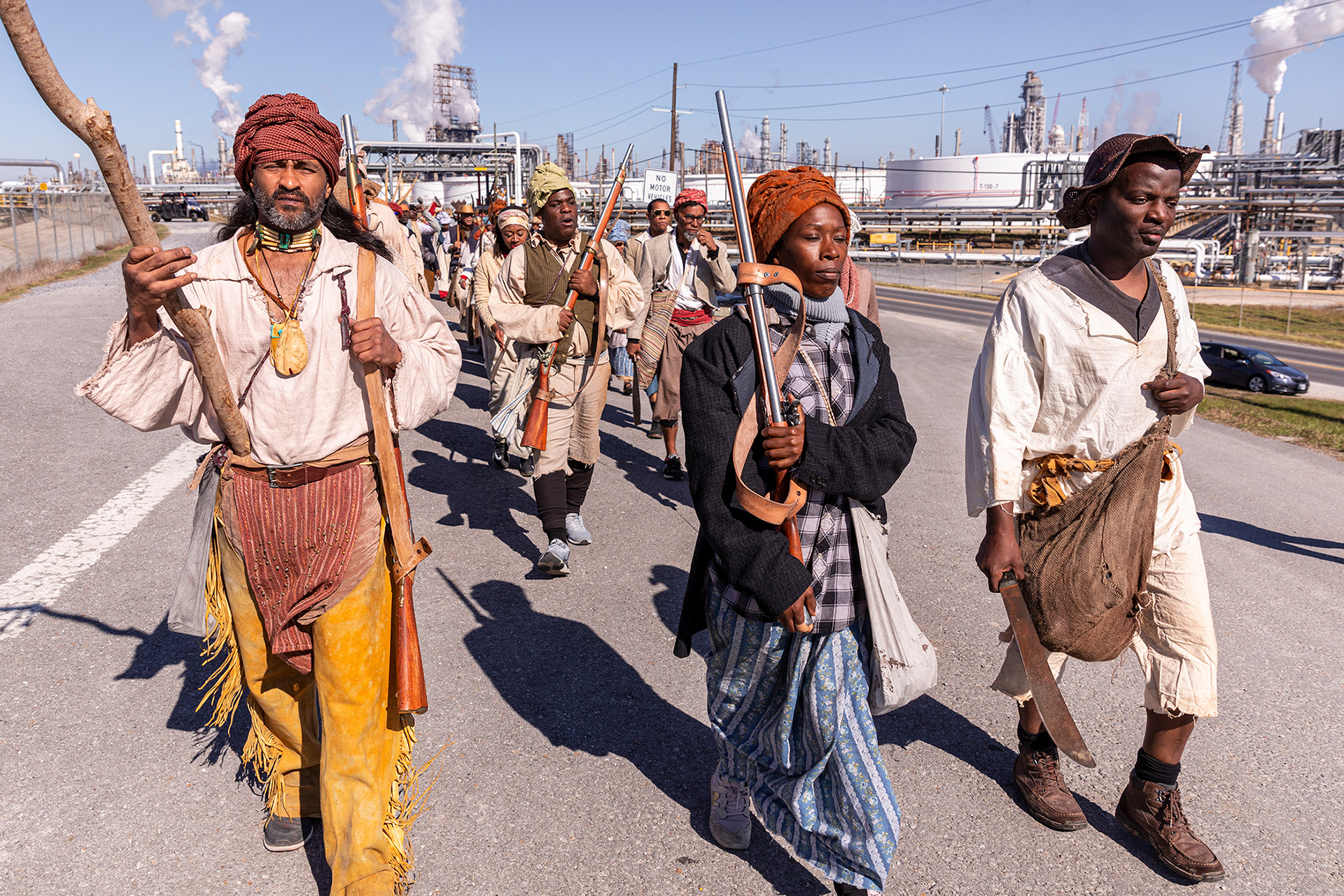 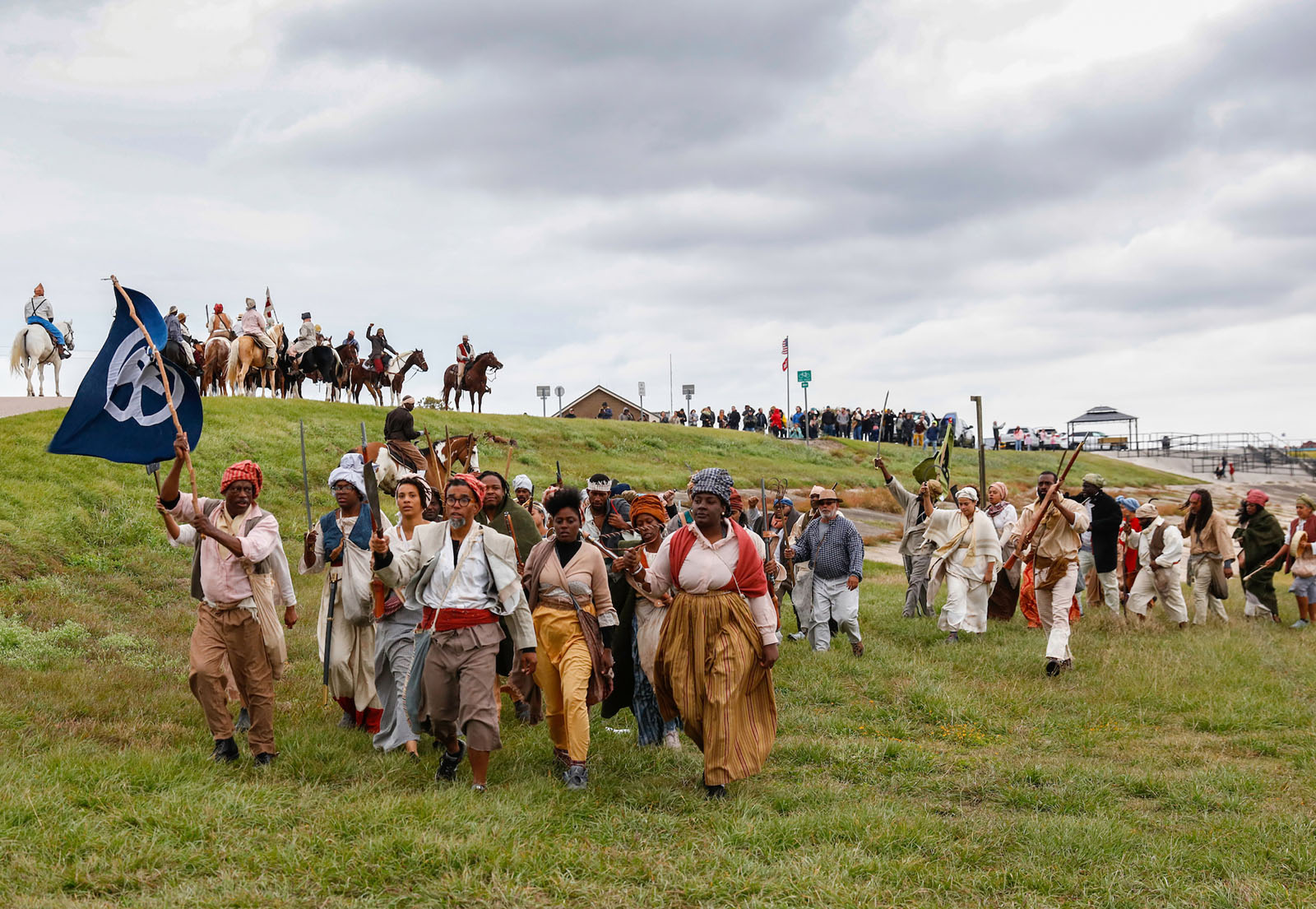 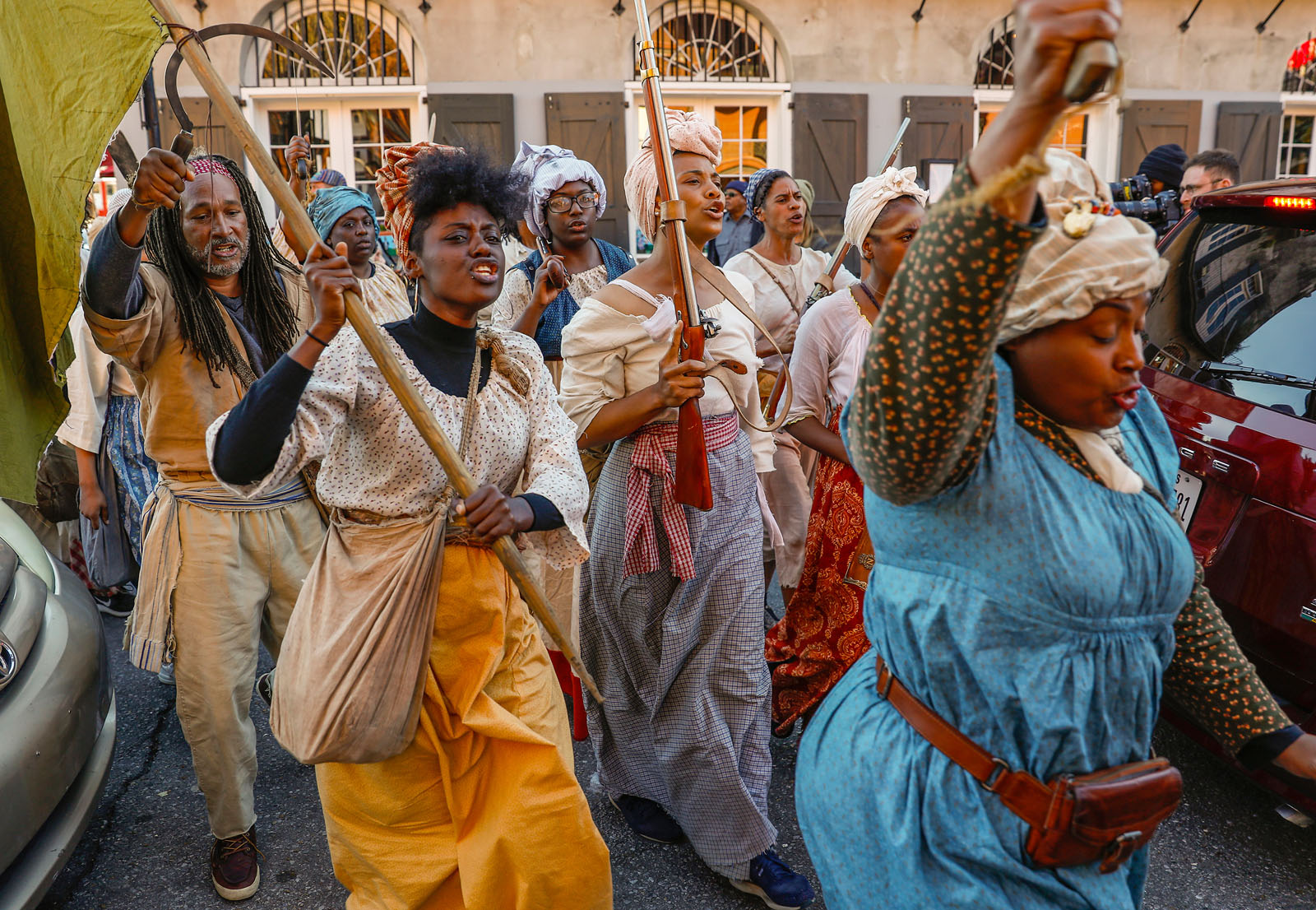 On to New Orleans! Freedom or death! We’re going to end slavery! Join Us!

Hundreds of reenactors echoed these chants of self-liberated, formerly enslaved people as they marched to seize Orleans territory in 1811. We were performing Slave Rebellion Reenactment (SRR), a community engaged performance spanning 24 miles over two days, through the River Parishes outside New Orleans and culminating in the city itself.

Charles Deslondes, Gilbert, Quamana, Marie Rose, and the many enslaved people who were part of the 1811 revolt are unsung heroes: their vision, if known, can inspire many. Their rebellion is a profound “what if?” story. It had a small but real chance of succeeding—what would that have meant for US and world history? Understanding that the past was not predetermined opens the ability for people to dream “what if?” for the future.

Our reenactment restaged and reinterpreted Deslondes’ German Coast Uprising of 1811—the largest rebellion of enslaved people in United States history, which took place upriver from New Orleans. SRR animated a suppressed history of people with an audacious plan to organize, take up arms and seize Orleans Territory, to fight not just for their own individual emancipation, but to end slavery. It was a project about freedom.

The procession was jarringly out of place as we advanced past the gated communities, mobile homes, fast food joints, grain elevators and oil refineries along the Mississippi which have replaced the slave labor camps (aka sugar plantations) of 200 years ago. This historic anomaly formed a cognitive dissonance for viewers, opening space for people to rethink long held assumptions.

We concluded in Congo Square—instrumental for preserving African culture in America—with a celebration—transforming the violent suppression of the freedom fighters into a joyous recognition of their courage and achievement. One by one, reenactors came to the stage and chanted the names of the participants of the 1811 revolt, to an updated version of the Janelle Monáe anthem Hell You Talmbout, which recognized the names Black people killed by police.

A key element of slave revolts was the organizing of small groups of trusted individuals, clandestinely plotting with others in small cells. Mirroring this structure, project recruitment took the form of one on one conversations about why this history is important in contemporary society. And throughout the year leading up to the performance, volunteers who could not participate in the walk organized sewing circles to create the vibrant visual look of the army.

John Akomfrah is collaborating with me to make a film installation based on the ideals of SRR.

The project was presented by Antenna, a small but mighty new Orleans Arts organization. Alongside the team at Antenna, the development of SRR was supported by many New Orleans organizations including Prospect New Orleans, Tulane’s Center for the Gulf South, Xavier University, and RicRACK. Funding for SRR has been provided by Ford Foundation, VIA Art Fund, Open Society Foundations, Surdna Foundation, MAP Fund, Andy Warhol Foundation for the Visual Arts, Nathan Cummings Foundation, A Blade of Grass, Art Matters, an incredible group of 500+ individuals, amongst many others.

There has been tremendous media coverage of Slave Rebellion Reenactment.  Some of the highlights are:

My op ed on why I created SRR, Blavity