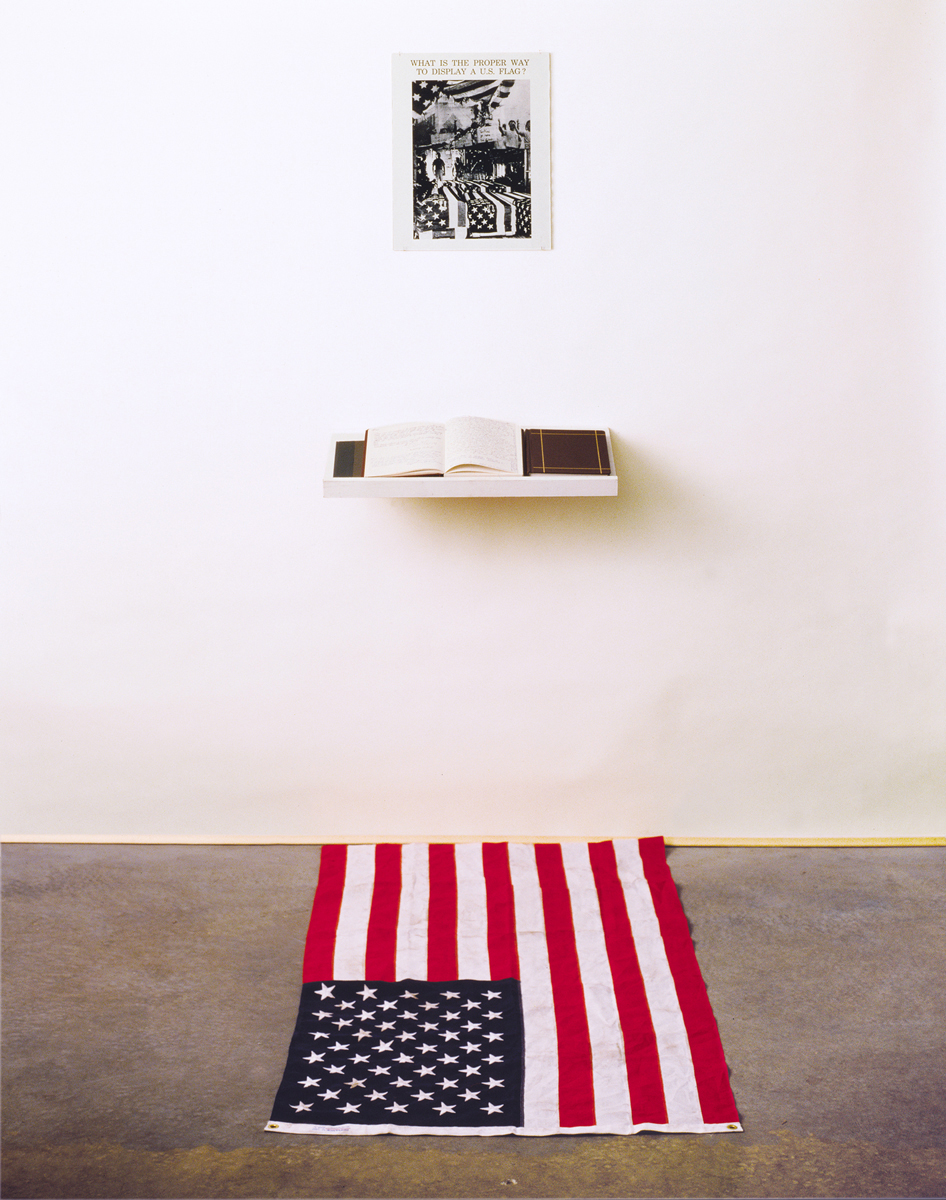 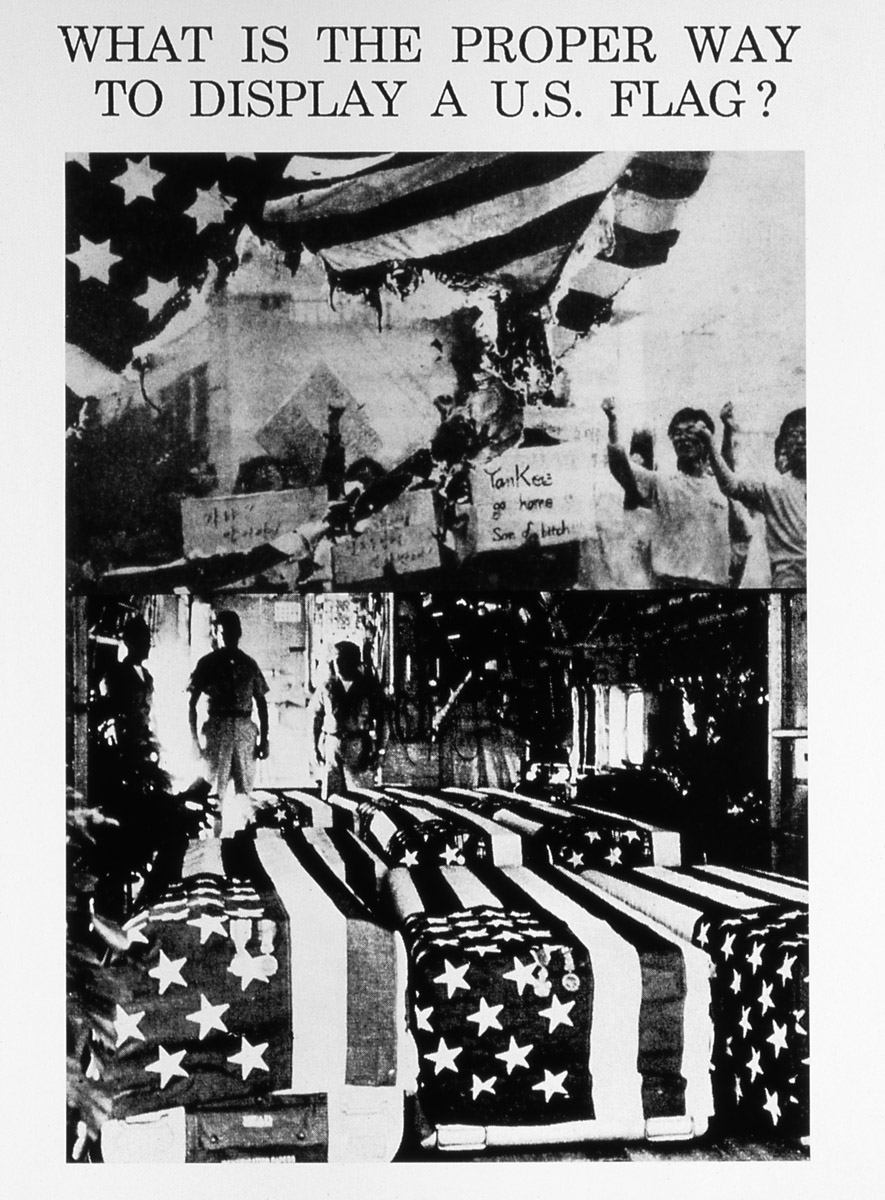 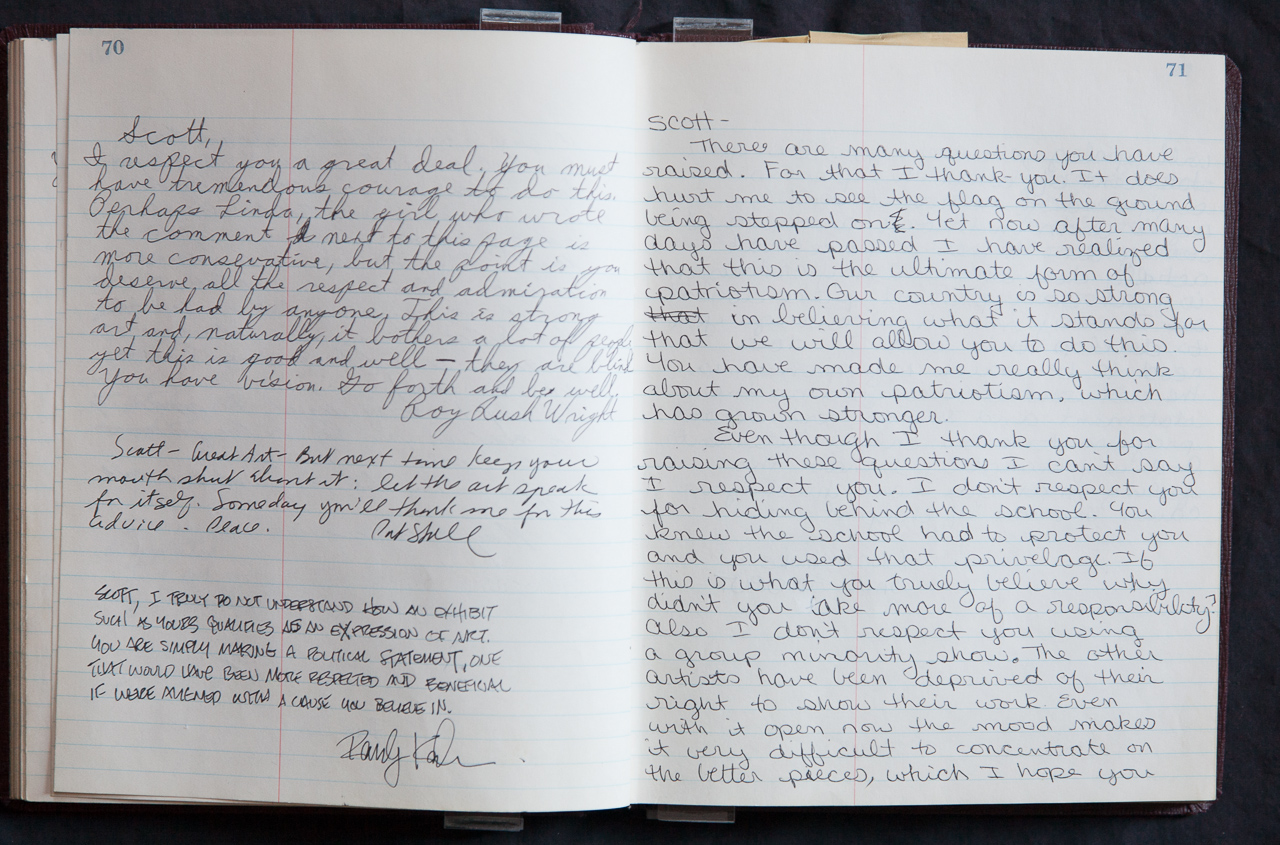 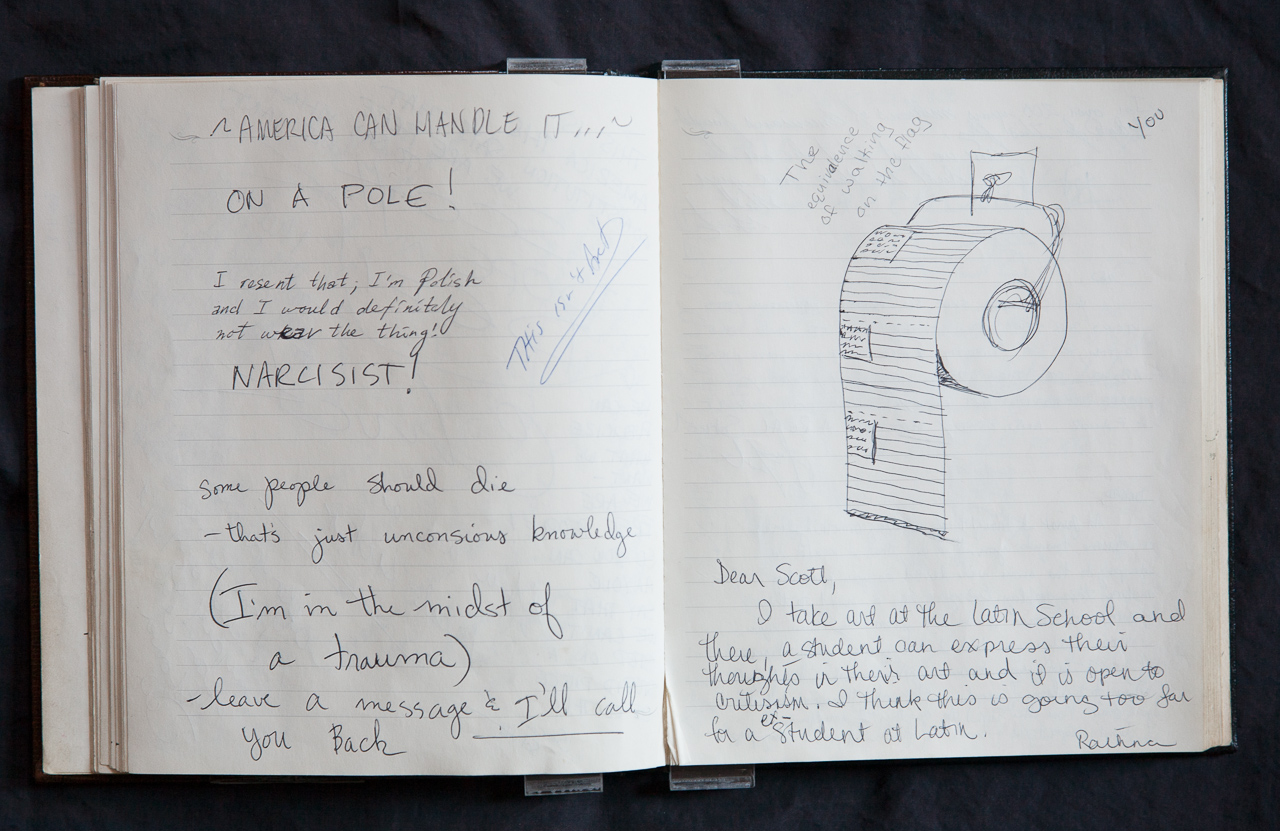 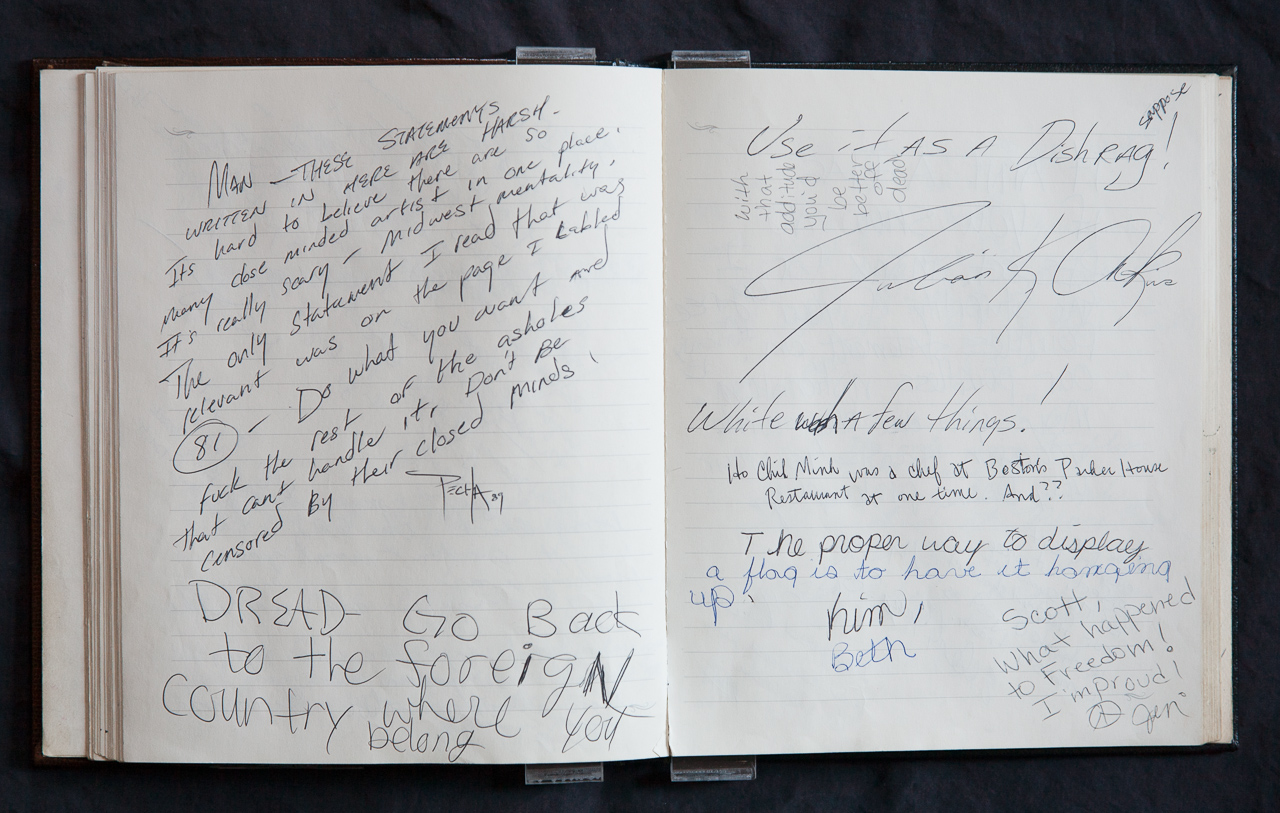 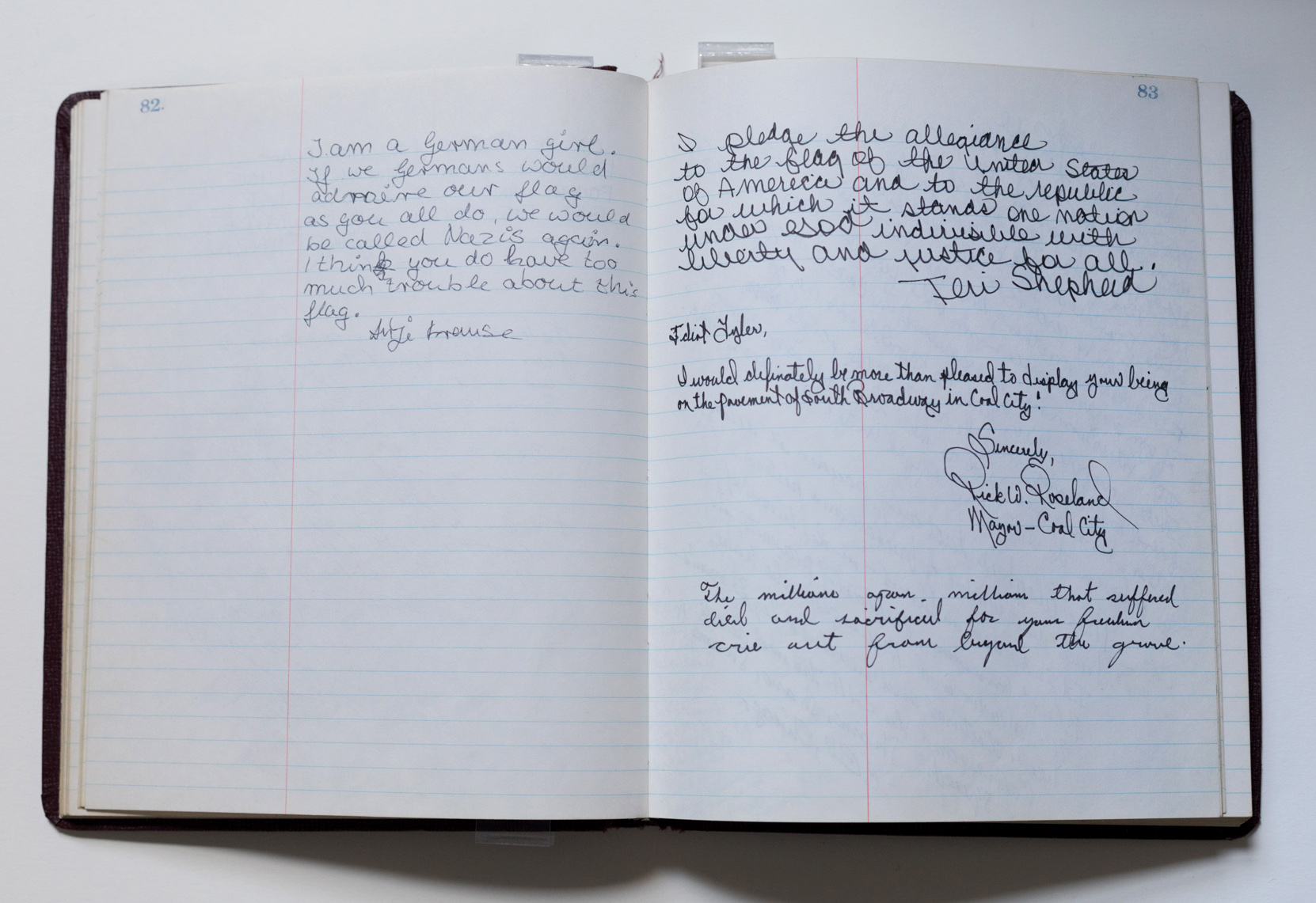 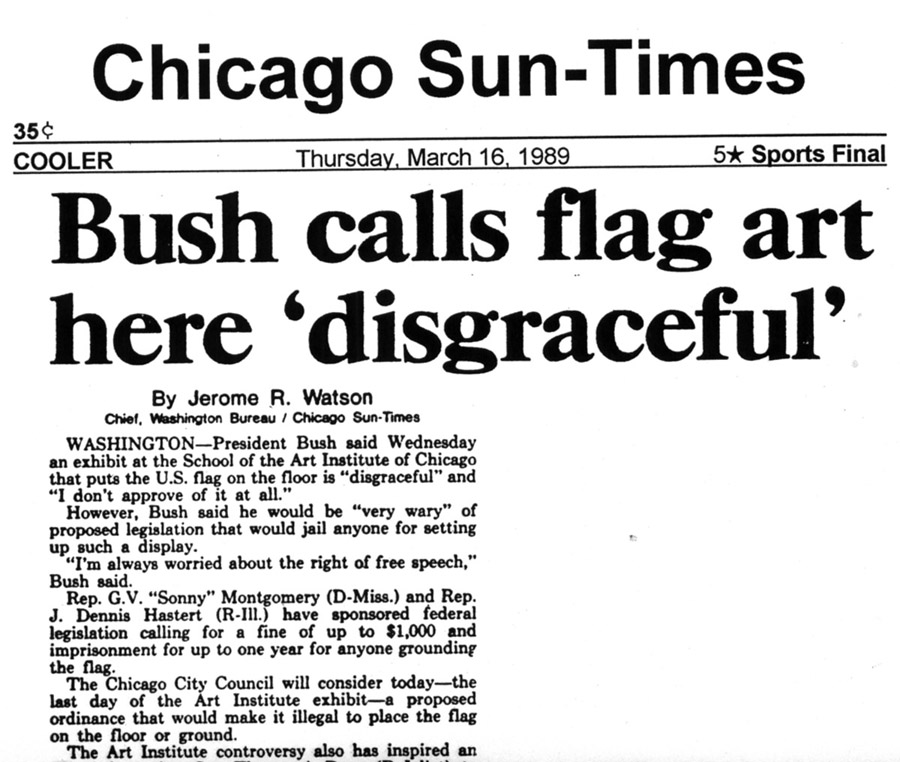 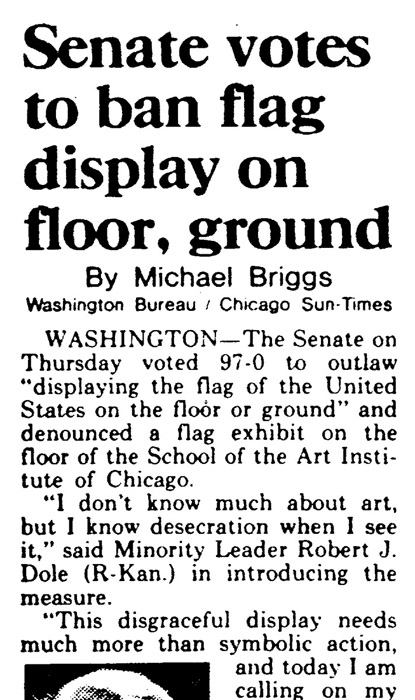 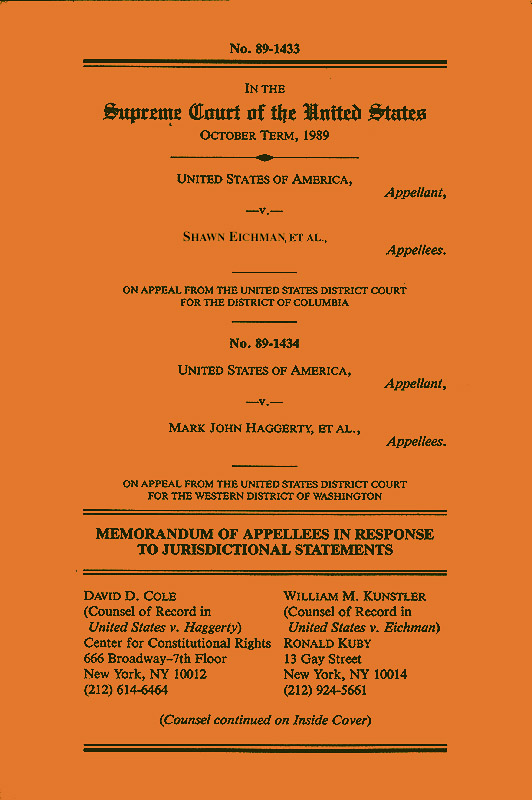 What is the Proper Way to Display a US Flag?

What is the Proper Way to Display a U.S. Flag? is an “installation for audience participation.” It is from the larger body of work, American Newspeek…Please Feel Free?

In 1989, while on display at the School of the Art Institute of Chicago, What is the Proper Way…? became the center of national controversy over its use of the American flag. President Bush Sr. declared What is the Proper Way… “disgraceful” and the entire US Congress denounced this work as they passed legislation to “protect the flag.” Senator Dole specifically noted that the law would apply to “the so-called ‘artist’ who has invited the trampling on the flag.” As part of the popular effort to oppose moves to make patriotism compulsory, I, along with three others, burned flags on the steps of the US Capitol. This resulted in a Supreme Court case and landmark First Amendment decision.

The installation is comprised of: a photomontage (the montage consists of pictures of South Korean students burning US flags holding signs saying ‘Yankee go home son of bitch’ and flag draped coffins in a troop transport; text printed on the photomontage reads “What is the Proper Way to Display a U.S. Flag?”), books (originally with blank pages) on a shelf, ink pens, a 3’x5′ American flag on the ground and an active audience. The audience was encouraged to write responses to the question “What is the Proper Way to Display a U.S. Flag?” As they did so, they had the opportunity to stand on the flag as they wrote their response. When this work has been displayed, thousands of people filled hundreds of pages with responses. Many many of those stood on the flag as they added their comments to the work. Below is a brief sampling of comments from these pages.

Samples from What is the Proper Way to Display a US Flag? ledgers.

There are many questions you have raised. For that I thank you. It does hurt me to see the flag on the ground being stepped on. Yet now after days have passed, I have realized tat this is the ultimate form of patriotism. Our country is so strong in believing what it stands for that we would allow you to do this. You have made me really think about my own patriotism, which has grown stronger.

I am a German girl. If we Germans would admire our flag as you all do, we would be called Nazis again…I think you do have too much trouble about this flag.

In Russia you would be shot and your family would have to pay for the bullets. But once again what do you expect from a nigger named “Dread Scott”?

Dear Dread, Like someone who viewed the exhibit, I began reading other people’s comments standing next to the flag, but gradually moved to standing on it. As someone raised to be iconoclastic (at least I thought I was) it was an interesting moment of self-awareness, which (I think) is the whole purpose of the display. Perhaps when human life and liberty is really valued above property (and symbols) in America we will all have more allegiance to the principles of “liberty” and “justice” for all. Congratulations on your courage in getting arrested to test this crazy law.

P.S. Kudos to the gallery for their courage. Why is it OK to “Knowingly maintain on the ground homeless people but not the flag”???

If you ever attended school in Illinois before becoming a student here, what did you learn besides the Bill of Rights? You learned the Illinois codes for displaying the American flag! One code stated the flag should not touch the ground, Didn’t you “New Generation” of students hear anything your teacher said? Were you rebellious and disruptive then also? You take your freedom for granted!
—Chicago Public School Teacher

Let it burn, Let it burn, let the Fucker Burn, Burn, Burn. The first time I had to confront the flag was in Vietnam–Black GI’s in my unit refused to stand & salute it! After much debate & anguish I did the same. The second time I was when I found Marine Vets burning the flag in anger, Finally I had to understand why youth carried the Viet Cong flag in support of the Vietnamese. I found out that it was because the Vietnamese were right & deserved to Win! Since then I’ve seen it burned all over the world & welcomed it. The US deserved to be defeated in Vietnam & deserves the same around the World.
—Joe Urgo, Viet Vet-1968

Hi, the flag is now folded on the shelf. I have the right to unfold it, but the veterans are here and I’m afraid to. Is it right (is it American) for me to feel afraid to exercise my rights?

Right now a lady is on the ground crying because of what you have done. I feel you did something wrong and I feel you should be put in jail or have something done to you for this. I love my country and it hurts me to know that don’t. I hope you feel good about yourself for what you are putting people through. You’re an asshole.

This flag I’m standing on stands for everything oppressive in this system—The murder of the Indians and all the oppresses around the world, including my brother, who was shot by a pig who kicked over his body to “make sure the nigger was dead.” the pig was wearing the flag. Thank you Dread Scott for this opportunity.

As a veteran defending the flag I personally would never defend your stupid ass! You should be shot!
—U.S. Navy Seal Team

This work first became know nationally and threatened with censorship in the pre internet era.  Most coverage is not readially available online. Three good articles are:

Elizabeth Hess, “Capture the Flag”, The Village Voice, 4/4/1989. Very long and very good story. Best coverage of the controversy surrounding What is the Proper Way to Display a US Flag?

Lilly Wie, Art In America, “On Nationality: 13 Artists,” September 1991.  Fairly long interview with me that details the controversy surrounding “What is the Proper Way to Display a U.S. Flag?”

Dread Scott, “Speakeasy,” New Art Examiner, June, 1989. Written at the time of the controversy, here are my thoughts on the the storm around my work and the stakes of the battle .